Your stomach is tied up in knots. You need to tell a colleague what you really think, but you can’t…fearful of the reaction.

Sweat breaks out on your palms. You need to say ‘No” to an unreasonable request, but a voice within tells you saying no isn’t acceptable.

Who’s running the show? You or your inner critic?

Arianna Huffington, President and Editor-in-chief of the Huffington Post said, “We may not be able to tune our inner critics out entirely, but we don’t have to let them run the show.”

The popular thinking is that the outer critics were our primary caretakers. In order to have our safety, nourishment and connection needs met, we took on their priorities (and cut off parts of ourselves). Over time, their voices became our inner critic.

Now, in our day-to-day life we play out the tension between our (hopefully more) evolved, integrated  adult selves and the inner critic that arose in childhood. Yet, certain scenarios bring out the worst in us.

Is  there someone  at work who makes you hold back, too meek to speak?

Who is it you can see yourself wanting to give a quick kick to the groin? (Come on we all have these thoughts from time to time.) You don’t have to berate yourself for the thoughts. Berating yourself is a way of knowing you’re under attack by the inner critic.

You can do something useful about it.

Okay, go somewhere quiet. Now, imagine a recent situation and visualize your inner critic sitting across from you. Take a minute, two at the most and play the scene in your head where you say everything to this inner including, “F–K off”.

You may have to go back and re-do this scene several times. And you’ll have to defend against the next attack and the one after that. Your defense will come more automatically and will be shorter and shorter. How will you know you have tamed the inner critic?

Your body’s  intelligence will  become more familiar.  You’ll get to know   that place somewhere near your navel that will relax, not be so tied in “KNOTS” from the “NOTS” once you tell this annoying inner critic to back off.

And soon, without leaving the scene completely, your inner critic will learn that YOU are running the show. 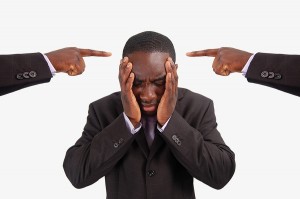