Home // Making Positive Shift // Your Past Lives On: Transform Your Shadow

Your Past Lives On: Transform Your Shadow 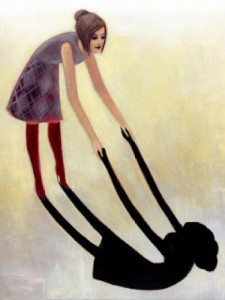 William Faulkner,  the great American writer said, “The past is never dead. It’s not even past.”

Proof came to light over and over again as we explored the shadow during the 3 week Transforming Your Shadow tele-summit with our wide range of masters and thought leaders.

Discussing parenting,  Dr. Chris White explained that what we deny in ourselves becomes “unacceptable” in our children and we are triggered when we encounter it. When triggered, our best intentions for providing love and support falter. The answer? Do your own work! Sort of like “put on your own mask, first”, as cautioned by flight attendants, the world over.

And with money, author of Money, Spirituality, Consciousness, Mayuri Onerheim explained that our early family beliefs and actions around money, whether they expressed abundance or scarcity, caution, openness or secrecy, generosity or hoarding finds its way into your own shadow material around money.

So the past, your past, lives on. As you navigate relationships, what was modeled for you, accepted by your caretakers, approved of, shows up again and again.

Did your parents like one another? Play? Were they affectionate, What was discussed and what was suppressed. How did they express sexuality?  What roles did they assign gender?

You didn’t leave it all behind when you left home!  The parts of you that weren’t appreciated or accepted may have gone far underground, but you’re still carrying them. And when something triggers a strong reaction, you can be sure, your shadow is behind it.

Also, as David Richo explained, your projections onto others sheds light on your own material.

Triggered by a controlling partner (in business or life)? Most likely there’s a controlling part of you that you’re denying. And the way to work with that is to begin to admit to yourself what lurks beneath consciousness. You may shy away from the controlling parts of yourself from an experience (or belief) that controlling people are manipulative, demanding and worse, domineering.

Using the example of control,  if you can you see that controlling also has many positive aspects, you can soften to it, open. For instance, people who control, get things done; attend to the details, follow through. They are often leaders.

So control itself isn’t either bad or good – how it manifests sets the scene.

Can you access that part of you leaving the negative aspects on the cutting room floor and go with the positive features?

What it takes is first surfacing your own tendency towards control ( or fear of it), and then with compassion and gentleness, befriending it.

Sometimes people fear control because they don’t want to lose acceptance and approval. They act as though they easily “go with the flow” but “act” is the operant word since their actions are motivated by fear and therefore inauthentic.

You could go through an entire list of strong, emotional reactions you have towards others, projections, they are called in the world of psychology. And begin to mine the “gold’ in each one by examining where in you the quality that upsets you (even angers you) lives.

By finding the gifts in the quality,  and slowly embracing it while leaving out what seems unloving or unkind, you can begin to lay claim to it – expanding towards your fullness, your richness, leaving nothing out.

The key to this work is compassion. Working through the “thousand disguises” as Jung called them, requires lots of it. Even when you’re uncovering the secret gifts that you’ve hidden in the dark.

For example if you play “small” at work, keep your ideas to yourself, rarely speak out or up, you may be motivated by a fear of standing out and the responsibility that comes with greatness. No less shadow material, your intelligence or creativity hides under the surface.

And don’t forget that these are not simply ideas and beliefs that reside in your mind. Over time, these patterns have rooted in your body, causing certain repeating constrictions…creating a shape, you might say.

When working with your shadow, movement and breathing that creates more ease, more space is required too. Liberating you not only from beliefs and fear, but from actual muscle tensions and contractions, physical practice is important and again, best done with compassion and gentleness.

Naturally, this work is best done with guidance, support and accountability. Doesn’t all change benefit from that? Yet, should you want to get started on your own here is a beginning practice:

What about this trait do I fear?

How can I live into the positive side of this trait without taking on the negative?

Remember the 5 Needs that helped formed our shadow: Attention, Appreciation, Acceptance, Affection and Allowing ( to be yourself). As you look at the traits that trigger you, ask yourself how they connect to the 5 basic needs.

To learn more about working with your shadow, virtually, in small groups and individually, contact us at www.thevaliantgroup.com